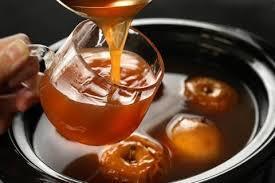 Among the leaves so green;

Here we come a-wand’ring So fair to be seen.

Love and joy come to you, And to you your wassail too;

And God bless you and send you a happy New Year.”

Wassail comes from the Anglo-Saxon phrase “waes hail” which was first used as a greeting or a toast to wish others good health. The proper response to the toast “waes hail” was “drink hail“, and both parties would drink. The phrase for the salute soon also became the term for the beverage they were toasting with, typically a spiced wine or ale. v In the thirteenth century, it was common to dip pieces of heavy cake or toasted bread into the wassail to soak up the liquid. In that era “let’s have a toast” literally meant, “let’s drink” or “let’s eat the toast in our drink.” This practice is where we get the use of the word “toast” as the drinking salutation we use today.

The ritual of drinking to each other’s health grew into a ritual of heading to the field or barn to drink to the health and prosperity of the crops and animals. The most common was the outdoor English drinking ritual that was performed in the apple orchards to ensure a good cider apple harvest. Bringing the drinking outside evolve into the practice of “wassailing,” or traveling house to house wishing well to those within, and possibly singing a song or two. In return, the members of the household were expected to fill the mugs of the members of the traveling party with a warm, preferably alcoholic, beverage.

This frothed beverage is a perfect, warming, winter treat.

2.   Place the apple halves, cut side up, on an aluminum foil lined baking sheet. Sprinkle with brown sugar and bake for 45 min, until soft.

3.    While the apples bake, pour the apple cider and brandy into a large soup pot and warm the mixture over medium-low heat. Do not bring it to a boil. Add the ginger and nutmeg. Place the allspice berries, cloves, and cinnamon sticks into a tea bag or tie them into a bundle of cheesecloth to keep them from getting lost as they steep. Place the bag into the cider and heat the cider until warm, 20-30 min. (Alternately, place the wassail mixture into a large slow cooker. Heat on low for 4-5 hours.)

4.    In a small bowl, beat the egg yolks until pale in color and frothy using an electric hand mixer. Set aside.

5.    In a medium bowl, whip the egg whites until stiff peaks form. Blend the egg yolks into the beaten egg whites, mixing until just combined.

6.    Temper the beaten eggs by slowly pouring 1 cup of the hot wassail mixture into the eggs, whisking as you pour.

7.     Remove the spice bundle from the wassail and pour the mixture into a punch bowl. Add the tempered eggs to the wassail punch, stirring gently to combine. (The froth will mix in slightly, but then float to the top.) Float the warm apple halves in the punch bowl.

*If you want to serve the wassail without the eggs, feel free, the spiced and spiked cider is wonderful on its own.

Sep 11
What does it mean to be a Christian

Subscribe to receive email updates with the latest news.